Though summer officially starts June 21st, it already feels like it with the long days. There is a sense of ease in the air. Traffic appears gentler, parking seems easier, and the ice cream truck is back in action 🙂 I really look forward to these days, and try to squeeze in as much outside time in the garden as possible.

By the way, my nieces and nephew, Monica, Tiffany and Alex, have just graduated from college – how time flies! I couldn’t be more proud!! Congratulations to them.

This is also the time of year when summer folks start returning to their homes in Castine, Maine. Over the Memorial Day weekend, Tom and I went there to open up our home. It felt more like spring with sunny afternoons and chilly nights – think short sleeves during the day and flannel PJs at night. And it was a lovely surprise to find the forsythias still in bloom.

After cleaning and dusting, we attended the garden club’s sale, had dinners with friends, joined the Memorial Day procession, and strolled down to the town dock for ice cream. 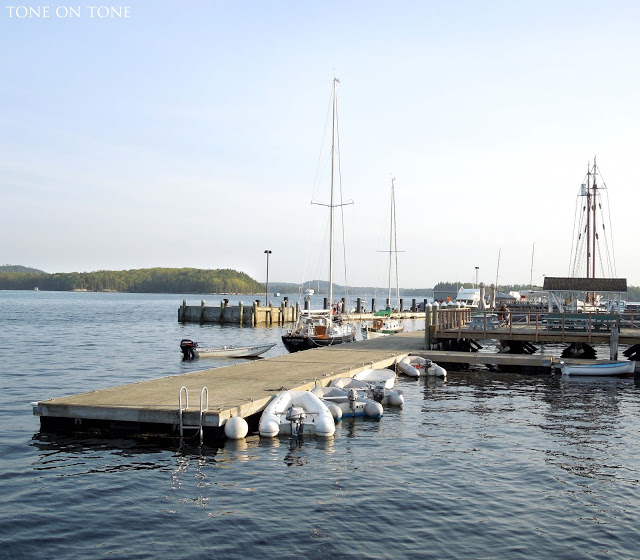 Castine has a very deep and picturesque harbor with views of various islands and Brookesville across the bay. Soon many boats will once again be back at their moorings. It looks like the town dock, with new railings and freshly cleaned floats, is all ready for the season ahead. See the end of this post for exciting news! 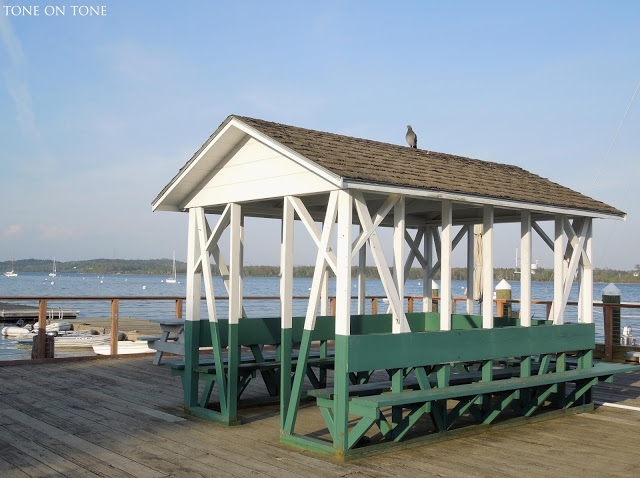 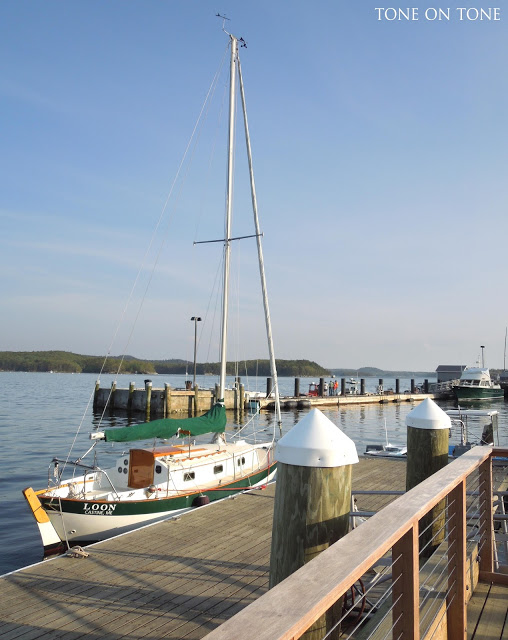 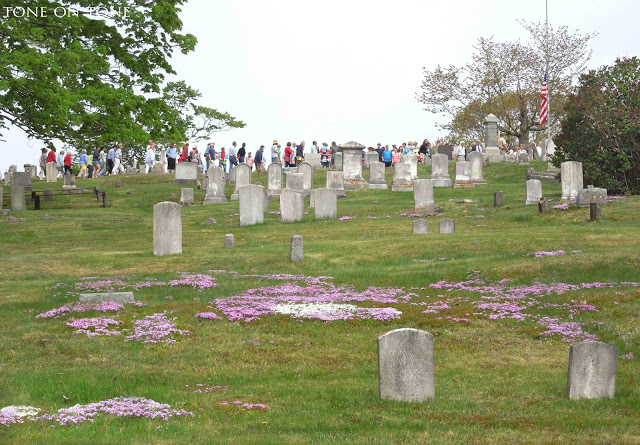 Each Memorial Day, Castine pays tribute to the fallen with an observance at the town cemetery. Afterwards, the procession, including flag bearer, veterans, residents, guests, officials, band Castine Fife and Drums Corps, and cub scouts, moves down to the town common for a reading, song and dedication. The procession finally ends at the dock with a laying of the wreath in the harbor to honor those lost at sea. See more photos from last year here. 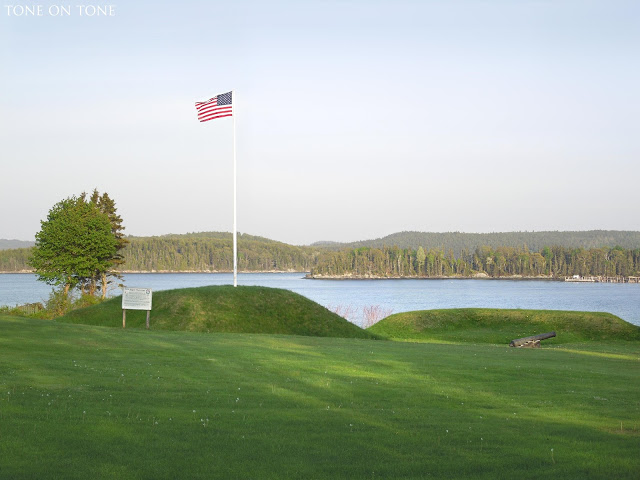 Afterwards, we visited Fort Madison located near the mouth of Castine harbor – it’s one of our favorite places to watch the boats come and go. This is a popular place for picnics and, during the summer, weddings, as the view out to the Penobscot Bay is breathtaking.
Since acquiring our home, we’ve done quite a bit of work. Let’s check out the changes in the kitchen starting with a “before” photo taken when the prior owners were moving out. 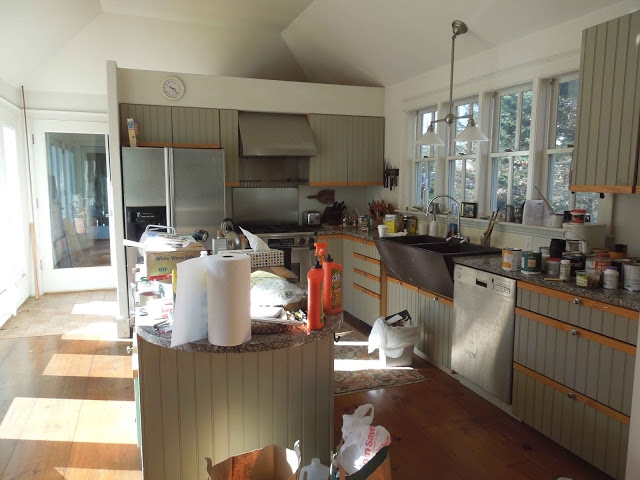 The kitchen is located in the new part of the house – an addition off the old kitchen, which is now the breakfast room. The addition also consists of a powder room as well as a screened porch connecting to the barn / garage.

All the cabinets needed a thorough scrubbing! Some also needed minor repairs. Though there is a wall of floor-to-ceiling glass windows and doors, the room felt drab due to the olive-green cabinets – not fresh and bright for a summer home. So I had them painted in 75% White Dove (Benjamin Moore). I also had the upper cabinet to the right of the windows removed – this really opened up that corner. Lastly, the dishwasher broke so it had to be replaced 🙁

Here is the kitchen today: 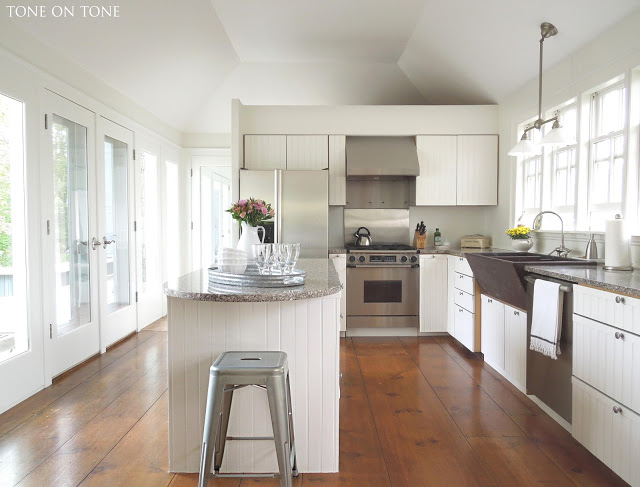 I learned that the granite for the countertops was quarried locally on Deer Isle – an island about an hour from Castine. Also, the soapstone double sink was found at an architectural salvage warehouse. Notice the extra wide pine floorboards – after a lot of Murphy’s Oil Soap, they look pretty good. We wanted to refinish them but didn’t have the budget. 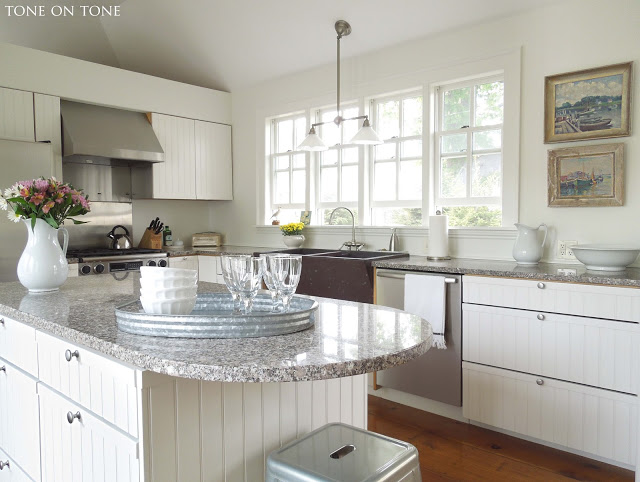 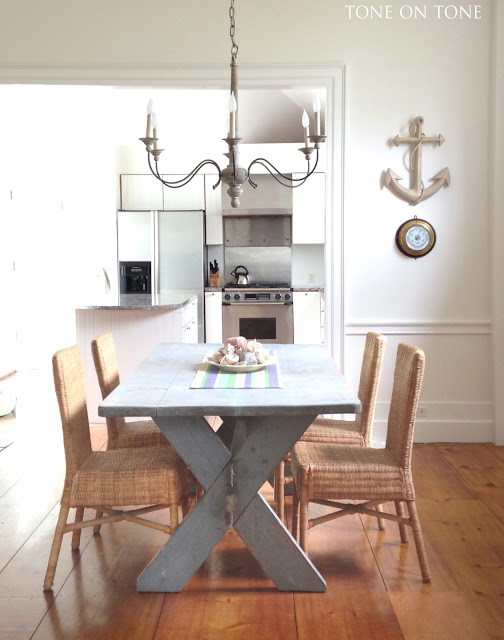 From our breakfast room looking into the kitchen. There is a massive brick fireplace, originally used for cooking, to the left of the eating area. 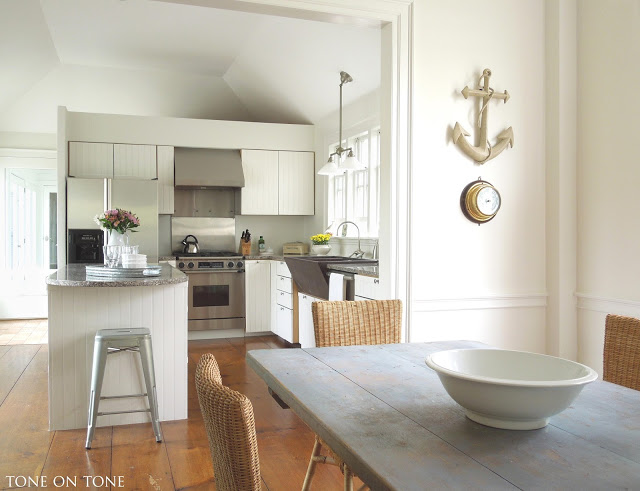 NOW FOR VERY EXCITING NEWS:
In the 1780s, a majestic frigate (sailing warship) brought the Marquis de Lafayette from France to the aid of General George Washington in the American Revolutionary War. That ship, the Hermione, was part of the naval blockade that prevented British General Charles Cornwallis from escaping Yorktown, which eventually led to the British surrender.
From July 14 – 16, a replica of Lafayette’s 145′ long Hermione will visit Castine as part of its transatlantic voyage from Rochefort, France, where the 18th century Hermione was built. This symbolic visit on Bastille Day is especially meaningful as the original Hermione had visited Castine in 1780 on a reconnaissance mission.
The Castine Historical Society, as designated host, is honored to welcome the Hermione to Castine. For more information, please visit here.
Credits and links for the following photos, as available, are provided under each image. 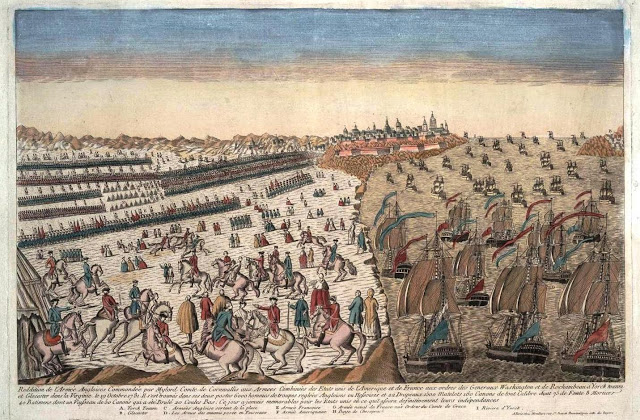 Siege of Yorktown with the French squadron at sea – via Wikipedia here. 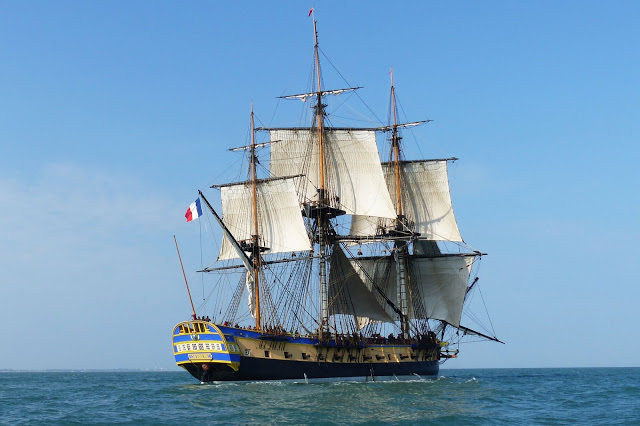 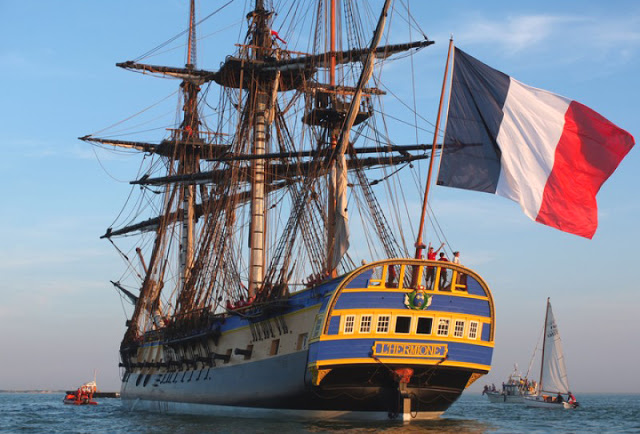 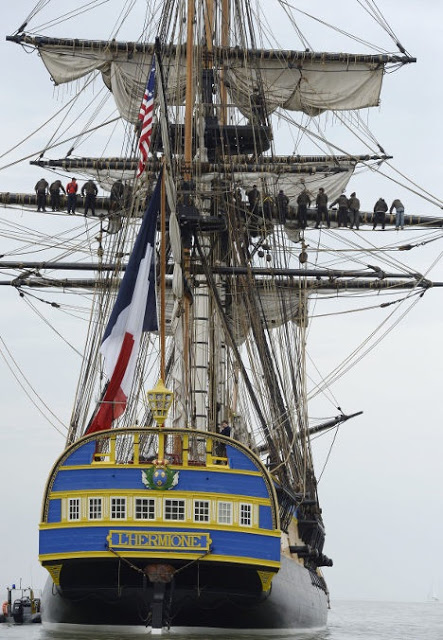 Photo via The Opinion here. 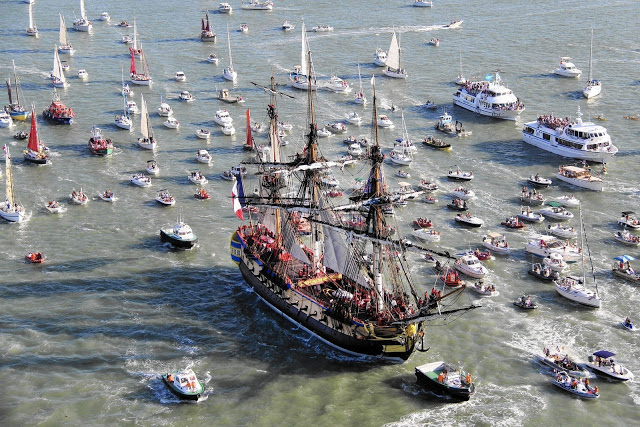 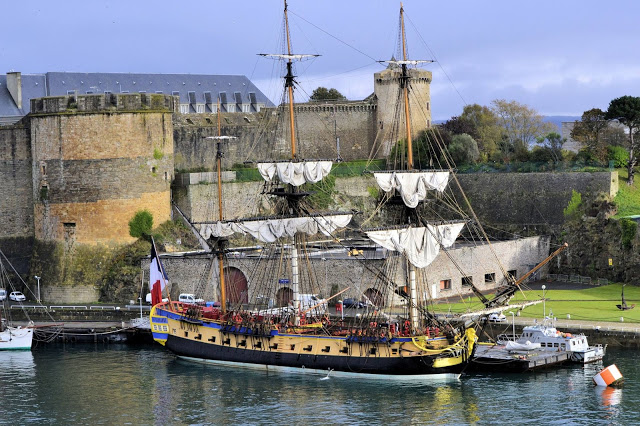 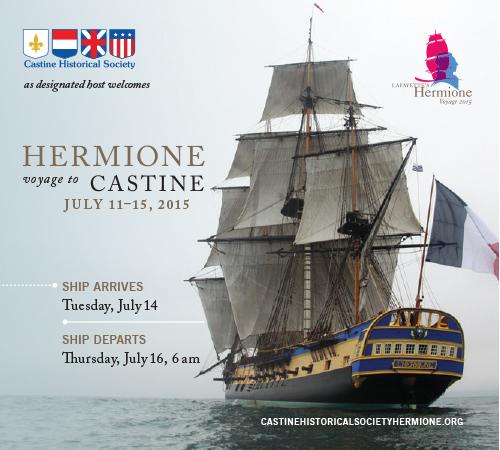 You won’t want to miss this highly anticipated historical event.
Hope to see you in Castine!
Cheers,
Loi
PS – For updates, please remember to visit the websites of the CHC and the Hermione.