Hello! Welcome back!Where did summer go? There is still another month left, but with the bombardment of fall catalogs and the start of school (which is earlier each year) it sure seems like summer is being pushed aside.

Well, I’m not ready for fall yet (except, maybe, for the arrival of white pumpkins!). Neither are my LIMELIGHT hydrangeas in Maine. The twenty or so shrubs, planted three years ago, have finally filled into a showstopping hedge.

The Limelights are incredibly hardy. They are in full sun and don’t mind, unlike other varieties including Annabelles which droop pitifully unless constantly watered. Plus, each one has made it through Maine’s harsh winters only to bloom beautifully and abundantly.

Now 5′ – 6′ tall, our entire L-shaped hedge is covered in blooms of summery chartreuse that brighten to soft white. And when the temps start cooling, those flowers will turn pink signaling the true arrival of fall.

So catalogs, let’s not push the fall merchandise just yet – summer is too short to rush! 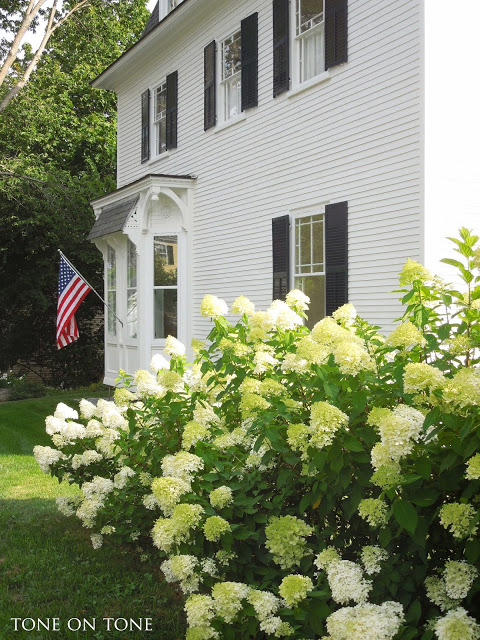 When I was designing this garden, I knew the area needed boundary delineation, not so much for privacy but for structure. Instead of a fence, the space called for something living, friendly and soft. Because it would be prominently located and quite long, whatever was planted had to be pretty. I decided against a dark green hedge which would have been a little stiff, formal and monochromatic. After researching low maintenance shrubs that bloom reliably during July and August (when we are at our summer home), Limelight hydrangeas seemed a great choice.

Three years later, the L-shaped
hedge, which runs
along the back of our home and wraps around the side, has matured beautifully. Tom and I receive numerous compliments on our summer showstopper, which, by the way, is also lovely in the fall when the flowers turn rosy pink. And, we’re told the hedge looks sculptural coated in the pristine Maine snow. 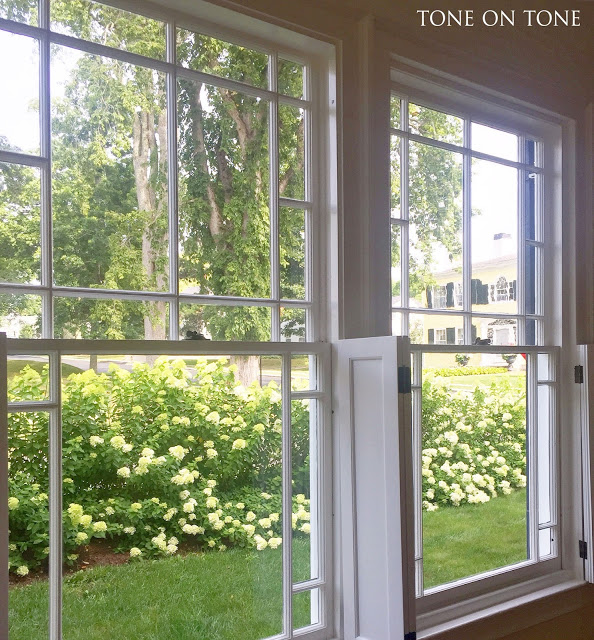 From our breakfast and family rooms, we look out to this stunning view of stately historic houses, ancient Elm trees, and the Limelights. 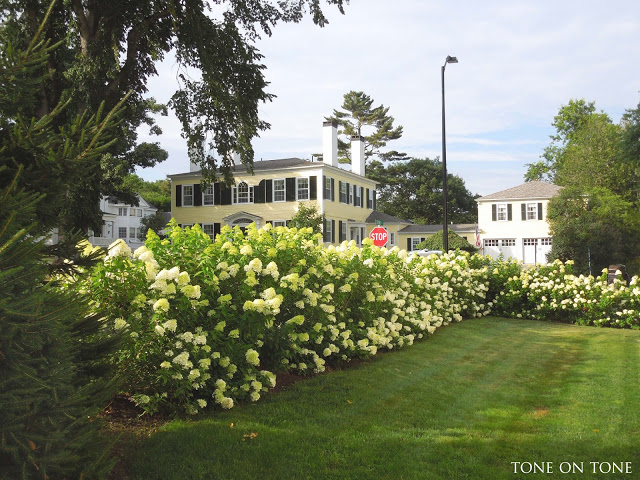 In Maine, the flowers open a lime green in late July (above) and soon turn white in August (below). 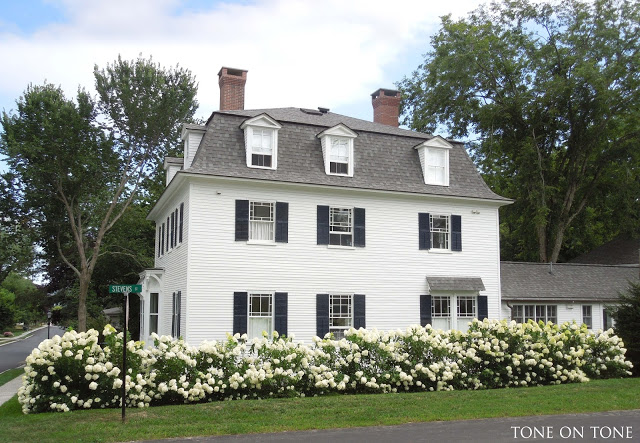 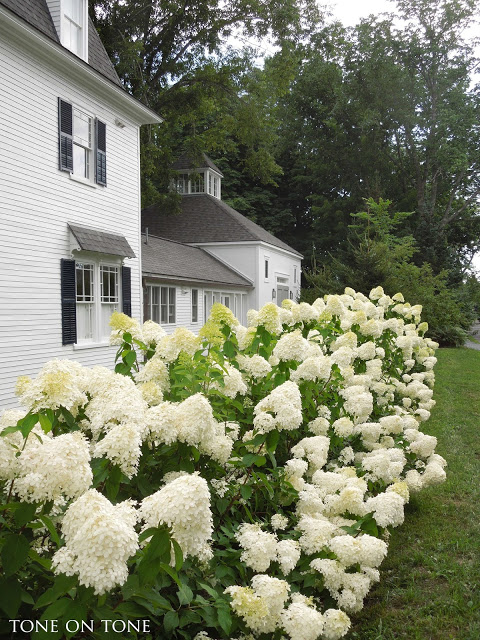 The hedge ends just before the kitchen located in the addition. Other than the ornamental cherry tree, this garden outside the kitchen, screened porch, and barn was recently planted.

When Tom and I acquired our historic home, there were diseased Maples, planted too close to the house, along with spindly Firs plus endless weeds of every kind. (See the before photos at the end.) We immediately had the big trees removed. After lots of weeding, we had the five Spruces planted for vertical structure and year round greenery. We then gathered the native ferns on our property and transplanted them around the trees.

The latest additions are the three dwarf Limelights to the left of the barn doors. Planted in May, this is their first season. So far, so good. 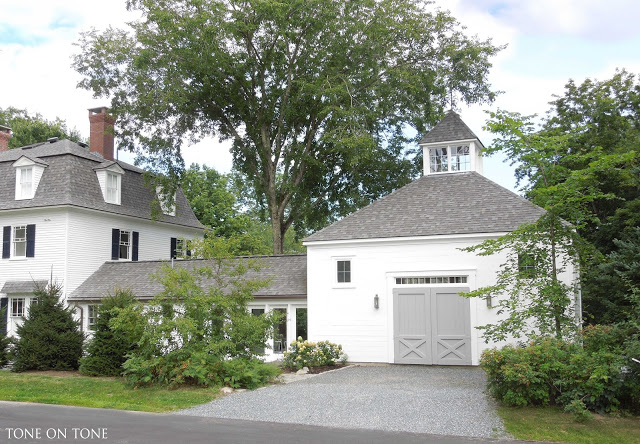 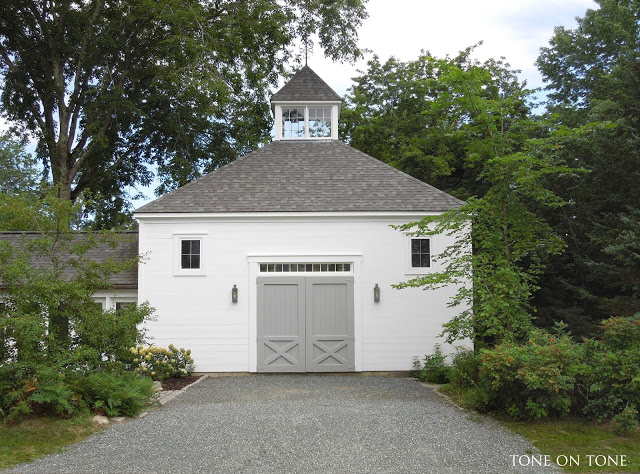 From the gravel drive to the house is a short pathway of granite blocks with moss growing between. There are also Astilbes (rescued from other garden beds on our property) and annual Salvias here. 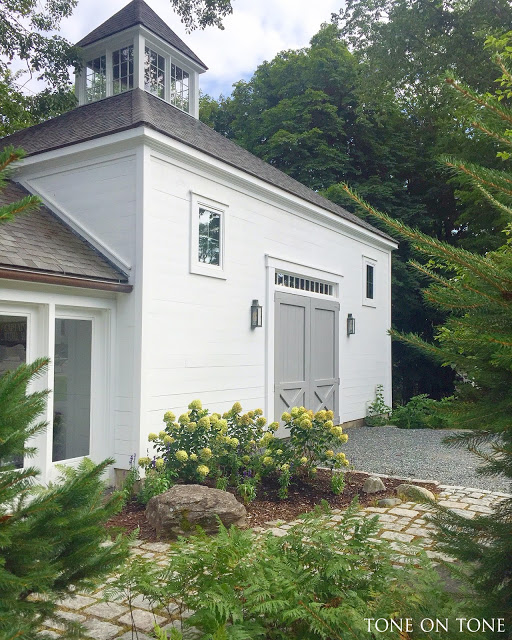 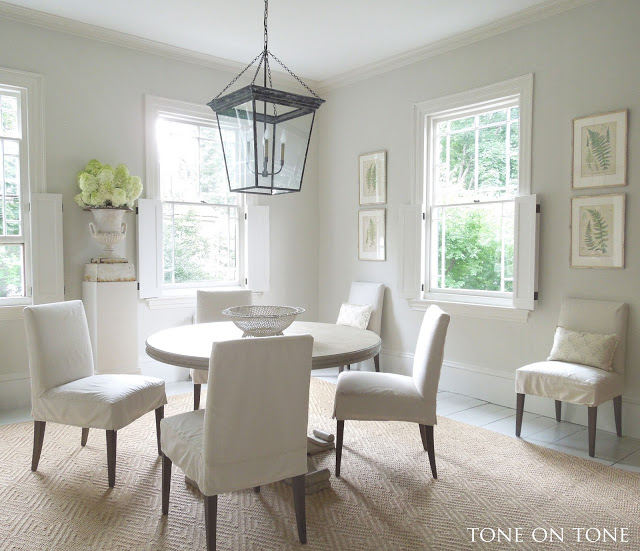 What to do with all the flowers? Enjoy them inside, too! I filled the antique iron urn in our dining room with loads of Limelights for dinner parties and cocktail events. The above flowers were cut in early August, while the ones below in mid August. Note the different colors. 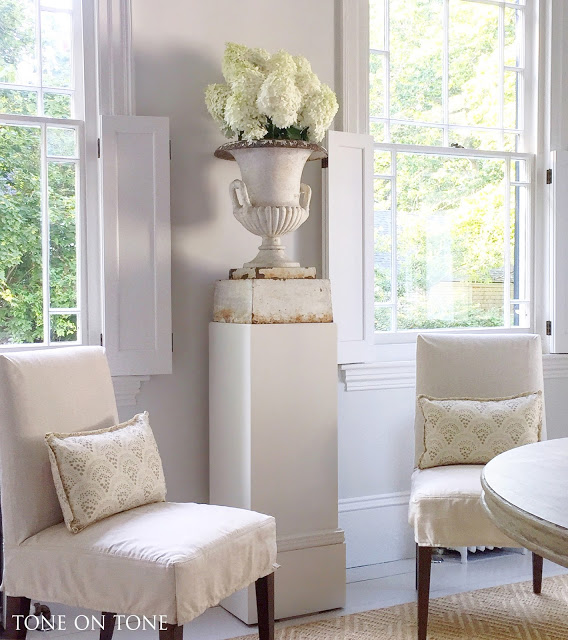 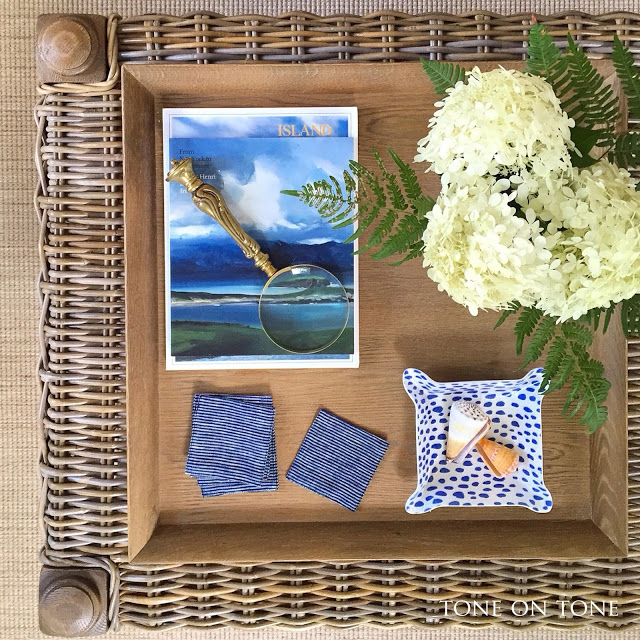 Two more arrangements: one on the family room coffee table with ferns, and the other with Gooseneck Loosestrife in a pink Hungarian pottery jug. 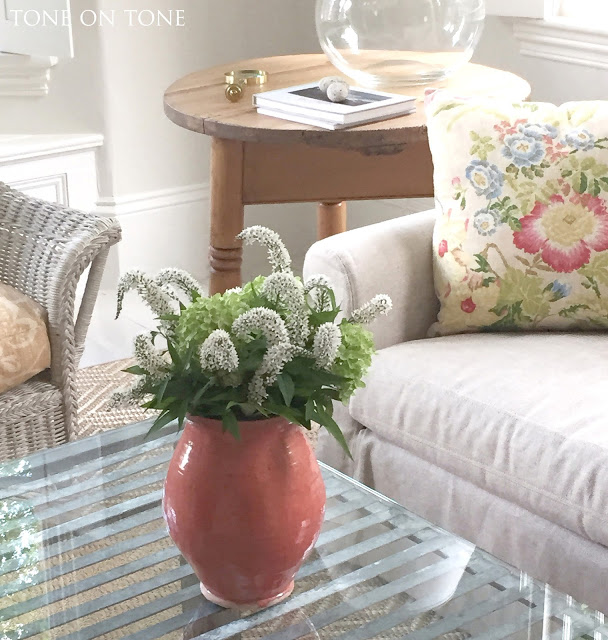 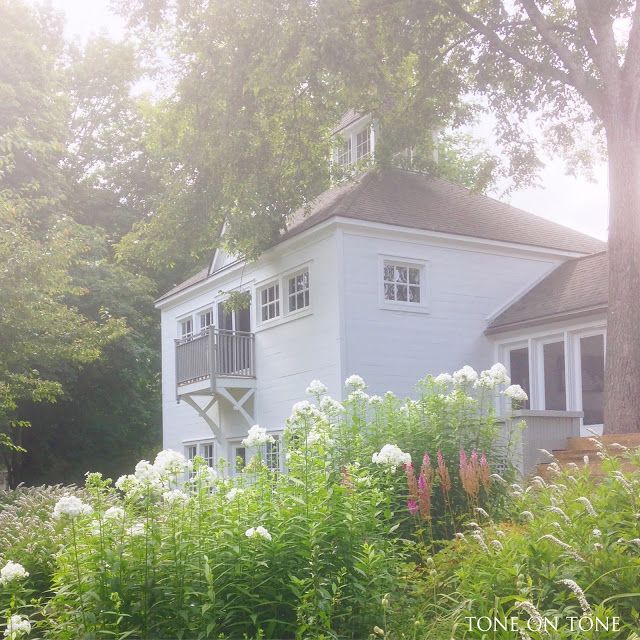 Speaking of Gooseneck Loosestrife, they have taken over the front garden beds. Here they are blooming along with Phlox and Astilbes – I took the photo on a foggy morning.Gooseneck Loosestrife is attractive but invasive. We inherited them, and do remove a few here and there. But since this is a second home, I try not to fuss too much about the garden. Whatever will grow happily with minimal watering AND still look good, I tend to leave alone.

Now let’s check out some before photos. 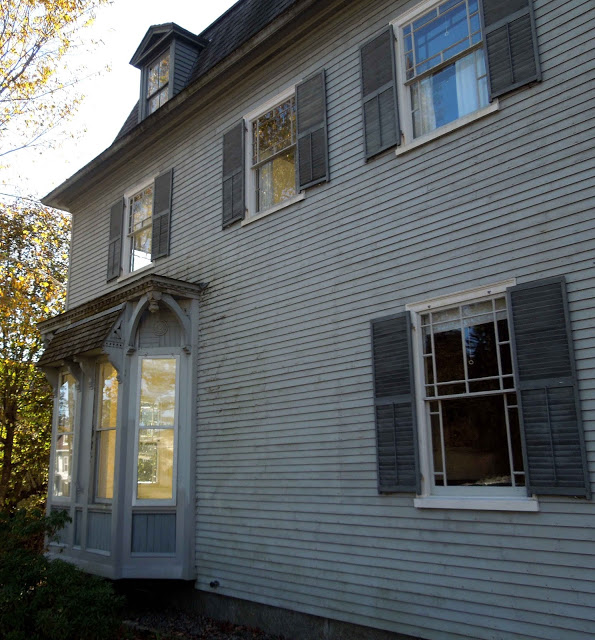 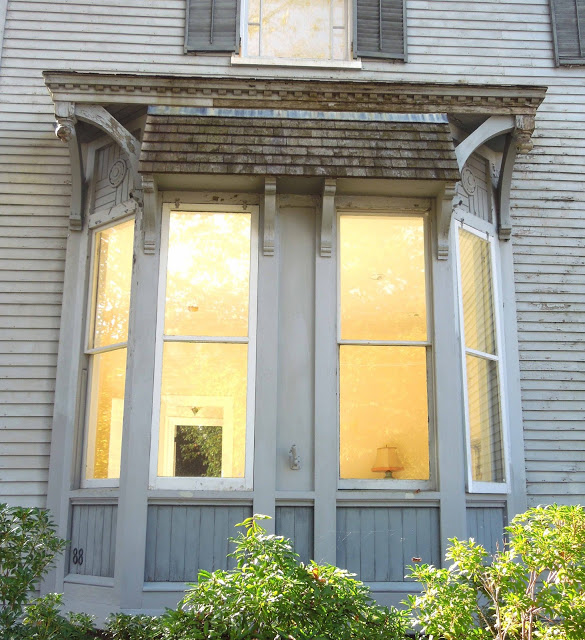 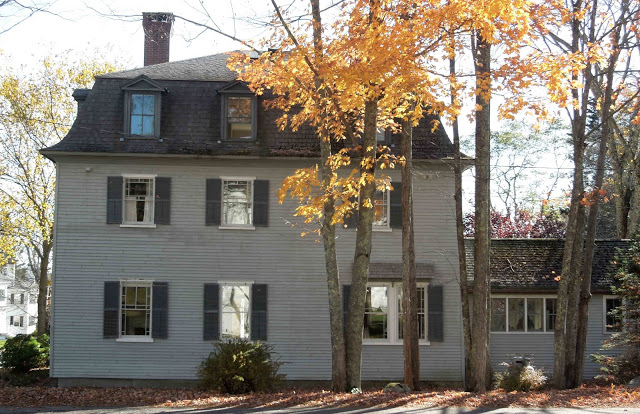 In addition to the new landscaping, we replaced the roof as well as lots of rotted wood. All the clapboard and trim were scraped, cleaned and painted.I love sharing a dramatic transformation 🙂
xo
Loi
PS – See more on my INSTAGRAM.
By Loi Thai Tone on Tone|2019-05-29T17:18:53+00:00August 26th, 2016|Castine, Flowers, Historic Homes, Maine, Our Garden, Our Home|46 Comments